Goodgame Studios is a leading free-to-play, online games development company. They operate across web and mobile platforms and cater to over 300 million registered users worldwide. With a rich talent pool of employees from more than 40 nations, they are among the largest German employers in the gaming software industry. Goodgame Studios aims to become one of the leading gaming companies in the world.

1 game by Goodgame Studios on GameWolf 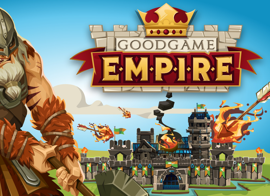 You need a great strategy to become a great king in Goodgame Empire! Turn an insignificant spot on the world map into a mighty kingdom. Produce resources to build your magnificent castle. Recruit an army to protect it and conquer other kingdoms to expand your power. Fight epic battles against other players or forge strategic alliances to help you on your path to the ultimate goal: becoming the most powerful king of all!

Play this game
Back to top